The HMS Naiad Association is non-political, non-sectarian, and non-racist.

To preserve the pride in all ships bearing the name HMS Naiad.

To maintain links between past, present and future ships bearing the name HMS Naiad.

To foster the friendship and comradeship formed when serving as a member of the ship’s company of HMS Naiad and to organise reunions.

A meeting was held at the St George Hotel, Chatham on 22 October 2011. Edited minutes are published here: 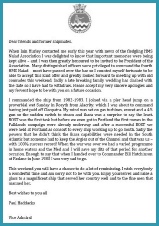 Welcome to one and all from the Chairman.

Letter from the President

The letter from Sir Paul Haddacks was read out by the Chairman expressing his disappointment at not being able to attend but relaying his warm regards for HMS Naiad and those who served on her.

“... I wish everybody a wonderful time and am sorry not to be with you. Enjoy yourselves and raise a glass to a magnificent ship that served her country well and to the fine men that manned her. “

Association Constitution, Purpose & Aim
Purpose of the setting up of the Association to the benefit of one and all to ensure that responsibility is taken by individuals for arranging reunions, fund raising and collecting of monies for reunions. Update on where we are in relation to setting up of HMS Naiad Association from meeting in February At Plough and Harrow Hotel, Birmingham.

Positions to be held for three years unless circumstances decree otherwise.

Iain Hurley (Secretary) stated that the minutes for the February meeting had been done but were not with us at this time he would look into providing some minutes in the future.

Merchandise
Iain showed members present the rugby and polo shirt he has had emblazoned with the ship's crest of HMS Naiad as a way of generating funds for the Association we would look to members to purchase these in the future. Iain said he can turn an order around within a matter of days to individuals who requested then. They come in a variety of colours, a selection was provided and were available to look at.

Finances
Bob Taylor (Treasurer) updated the members on the current situation re the financial state of the Association and mentioned that he would be looking at ways to generate funds as well through tie pins, lapel pins / badges, cuff links, ties and possibly mugs and tankards asked the members if they had any contacts who could assist by way of making ties with the badge thereon cuff links etc.

Bob stated that this was being done to ensure that everyone benefited from the organisation and not for individuals.

Membership
Bob asked members present to complete an application form to officially become a member of the Association those not already members completed the form and paid the joining fee. It was explained that those who attended the February meeting had paid the fee and therefore gained an extra 6-months. It was decided that Association membership would be renewed every twelve months at subsequent reunions.

Allen Elliott asked about setting up a direct debit to automatically transfer the fee from one account into the Association account to avoid the necessity of writing cheques or transferring the funds on a one-to-one basis.

Bob said he would look in to the setting up of a system whereby this could be done and report back to members via e mail.

Bob said he would send receipts out to those new members joining by way of e mail.

The Website
Roy Crawford (Web Master) gave an update on the current situation re the Association web site and the problems he had when he took it over from the previous owners administrators.

Brian asked that the Association own the site as opposed to Roy having ownership of it. This was agreed.

It was agreed to pay Roy an agreed sum for out of pocket expenses for setting up the site.

Roy was asked if he could put an area whereby members only could look at the site. Roy will look into this and report back.

Reunions
Iain spoke about future reunions commencing with should it be annually or bi-annually it was unanimous that it should be annually.

The date / weekend was debated and it was suggested and agreed that the same weekend should be utilized for the next reunion to fall in line with Trafalgar Day. This was agreed date of next reunion weekend of the 19th 20th and 21st of October 2012

Iain then asked members for the venue of the next reunion it was decided by members that it should be held in Liverpool. Iain to research hotels, activities for the weekend and report back via e mail to the members.

Thanks & Closing Remarks
Dave Bradshaw offered a vote of thanks to all who had organised the initial meeting in February and for the reunion this weekend.

A special vote thanks was nominated by Iain for Reverend John Williams MBE who had kindly written the prayers for the reunion and who we will meet at reunion in Liverpool next year.

There being no further business Roy Crawford read the closing prayer for those that had crossed the bar.

The meeting was closed at 11:25hrs by the Chairman.