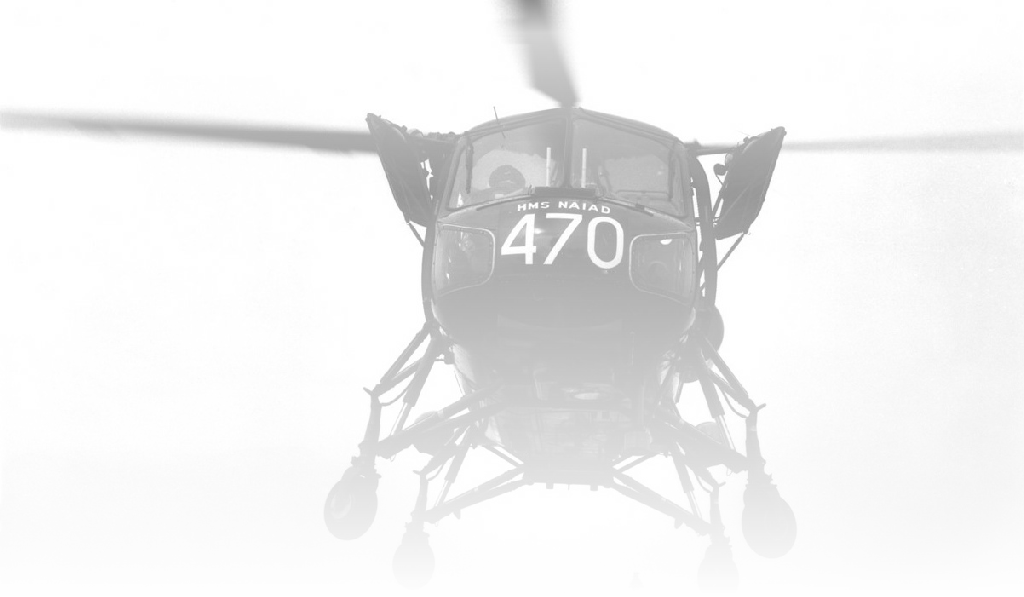 During exercises in the Irish Sea in February 1967, HMS Naiad lost it's Wasp after the helicopter's engine shut-down whilst conducting a practice MATCH run (Medium Asdic Torpedo Carrying Helicopter). Pilot, Tony Mathias was executing a run at a height of 400 ft when the engine shut down and he lost 100 ft before realising what had happened. He commented "if it had been a large bang I would have known immediately something was amiss".

Tony's recollection and experience of the incident is reproduced in full, below;

"At the same time as sending out a May Day, I hit the inflation bag button and thankfully both bags deployed – Chas told me afterwards he had heard the thump of the bags and had assumed that something more sinister had occurred. He put out a May Day only to hear Chas Simpkin, the helicopter controller, keeping his transmit button pressed shouting up to the bridge “The silly bugger is going in – full ahead both, hard a-starboard”. It was at this point, I knew that at least a rescue was at hand !!.   By this time I was down to less than 100 ft but managed to flare out onto the back of a wave as I hit the water.

I tried a swift exit from the cab only to be brought up to a full stop – after releasing the seat belt !!!!! – tried again to exit the cab only to find my leg had fouled on something – took a deep breath and reached down my leg to extract the survival knife, as I did so the leg was released and I swam out.  I wanted to find out what had happened and climbed-out onto the engine but could see nothing obvious that could have caused the shut-down. I dropped down into the water and swam clear before inflating my dingy and firing off a mini flare. (Apparently the old man, Captain Peter Anson saw the flare and muttered “Thank God he is OK”).

The sea boat picked me up, but I wanted to recover the helo, but the sea state and wind prevented this and she went down below Naiad.

It subsequently transpired that another Wasp went down in the Arabian Sea the same day as my incident and the submarine which had been exercising with hit nosed under the helo, blew its ballast tanks and carried it into Aden on its casing.

The cause was quickly established to be failure of the fuel control quadrant which had simply closed the HP Cock shutting off fuel to the engine. A quick signal to Portland found upwards of another eight Wasps with cracks in this quadrant and, as my accident report tallied precisely with that of the Aden incident, I was exonerated"