HMS NAIAD paid off at Portsmouth in April 1987 and was subsequently utilised as a floating test-bed for trials of design and construction developments resulting from the lessons of the Falklands War. These were essentially Hull Vulnerability tests organised in three phases.  The tests, were to involve fire, shock and blast trials, the first at Portsmouth, between July and October 1988 after earlier mining trials.  The ship lost her name and penant number before the trials started, being referred to instead as “HUL-VUL” for the duration of the tests.  Part two of the test was conducted at ARE Dunfermline, Fife in the spring of 1989, the hulk having been towed there from Portsmouth by RMAS Robust.  She arrived back at Portsmouth in August 1989 in tow of RMAS tugs Foxhound, Bustler and Rolslicker for the final blast and fragmentation trials in the autumn of that year.

Several concepts were considered during the trials which involved the reconstruction of part of the ship to resemble a type-23 frigate.  These included the evaluation of the Wormauld “Status” damage control monitoring system, a blast-proof control room, fire resistant computers and a shock-absorbing deck.  In addition, Sea Gnat and Super RBOC chaff were tested against a “live” Exocet missile attack, off the coast of Scotland during the summer of 1989. Lessons learnt during the trials were incorporated into new builds and, it is believed, lead to retro-fitting during refits of subsequent ships.

On completion of these trials the hull was due to be sunk as a target in the Western Approaches. However she was retained and fitted with a large box girder bulge along each side (see the mini-gallery, right), as a functional trial to test the viability of incorporating  similar structures into the passageways of new ships with the intention of increasing longitudinal strength without restricting movement around the ship.

Trials continued until the Autumn of 1990 when, as planned, she was sunk as a target. 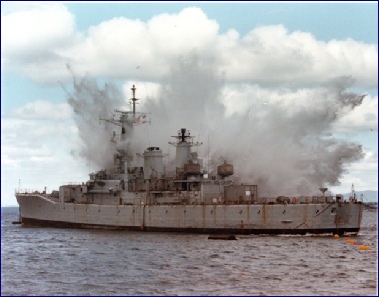