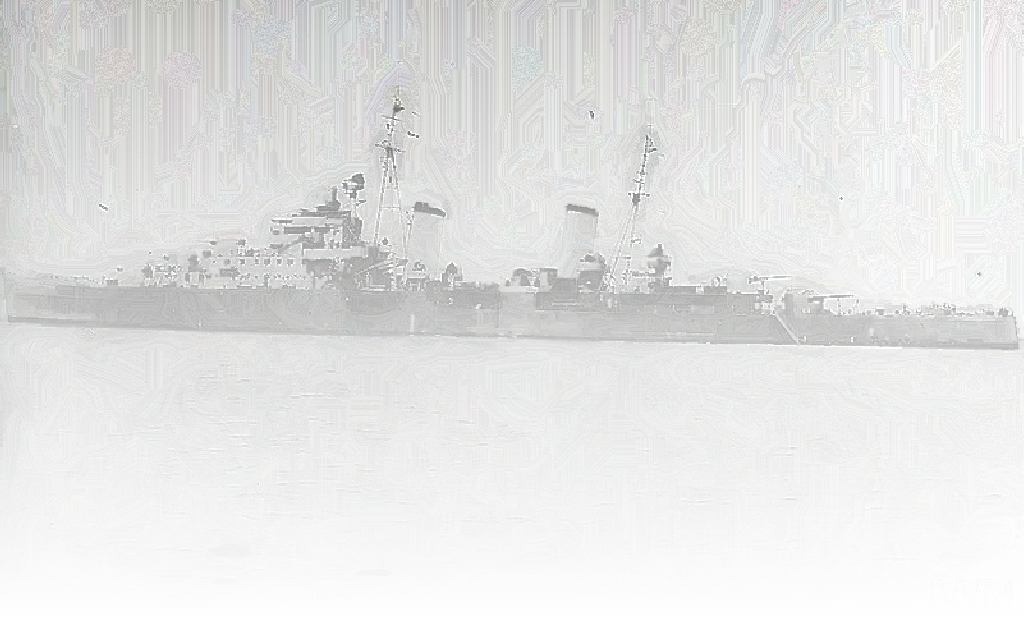 II, particularly in the Mediterranean, including the defence of the Malta Convoys,

the evacuation of Crete and bombardments of North Africa. A 5,450 ton, Dido class

torpedo tubes and sixteen other guns.

The Dido were originally built as anti aircraft cruisers, in support of the Royal navy capital ships, with a specific theater in mind, the Mediterranean Sea.

The Dido were highly influenced by the Arethusa-class, which stopped being launched in 1936.  The idea behind their configuration was to use the secondary armament found on the King George V battleships (5.25-inch twin turret), and use it as a dual-purpose weapon (anti-air and anti-surface).  The Dido-class was originally scheduled to receive 5 of these turrets, but because of shortage, most of them only received 4.In 1935 the Admiralty agreed on two cruiser designs as part of an overall re-armament program; the larger Town Class, competitive with US and Japanese designs, and a significantly smaller ship that could be rapidly built in large numbers. It was hoped that this smaller design would address the shortfall in Royal Navy cruisers at that time. The Dido Class was the result. Dido, Euryalus, Naiad and Pheobe comprised the 1936 build program, Bonaventure and Hermione the 1937, Charybdis, Cleopatra, Scylla the 1938, and Argonaut the 1939 program. The 1939 program also included Bellona, Black Prince, Diadem, Royalist and Spartan, all of which became the modified Dido Class. The modified Dido’s differed from the earlier ships in their forward superstructure and funnels, straight on the modified and raked on the earlier ships. It should also be noted that Charybdis and Scylla were significantly different from their sister ships. They hosted eight 4.5" guns rather than the ten 5.25 inch guns more commonly found on Dido class cruisers; and the forward deck house was much larger in order to accommodate flagship staff.

Naiad itself, was ordered from R&W Hawthorn, Leslie & Co. Ltd., Hebburn-On-Tyne. Her build was delayed by repair of damage caused by air raids to her turbine mountings due to a near miss, and damage caused whilst docking resulted in compartment flooding.

After completion in July 1940, she joined the 15th Cruiser Squadron of the Home Fleet, and was utilised in maritime trade protection and convoy defence & patrol in the North Sea and North West approaches.  On 28 Jan, 1941 she sighted the German battle cruisers Scharnhorst and Gneisenau just south of Iceland, but the cruiser lost the contact after a short time, while the German ships were forced to break off their attempt to steam into the Atlantic.

In May 1941 she was based in Malta as flagship of 15th Cruiser Squadron in Force-H, took part in Crete operations and in the campaign against Vichy-French forces in Syria, where she engaged Guepard together with HMNZS Leander. The cruiser subsequently took part in several operations to resupply Malta

On 9 Mar, 1942, Naiad sailed from Alexandria as flagship of a cruiser force, consisting of the cruisers HMS’ Dido, Euryalus, and the

destroyers HMS’ Kipling, Kelvin, Lively, Sikh, Zulu, Hasty, Havock and Hero to attack a reported damaged Italian cruiser, but this report proved to be incorrect and the ships turned back from Malta to Alexandria accompanied by HMS’ Cleopatra and Kingston. The task force was unsuccessfully attacked several times during their voyage, by Italian torpedo planes and German bombers.

At approximately 20:00hrs on 11 March, Naiad, bearing the flag of Rear Admiral Vian and commanded by Capt G. Grantham, DSO, was hit by one torpedo on her starboard side amidships from German U-Boat 565 and sank in 35-minutes, just north of Sidi Barrani, Egypt. HMS Jervis rescued the ship’s company survivors, including Admiral Vian.  Many survivors spent hours in the water amongst fuel-oil and debris before being rescued, indeed the first attempt at rescue was aborted as men were climbing aboard ships when it was reported that a U-boat was still in the area. 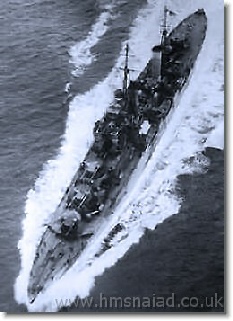 Above - Cheerful survivors of HMS NAIAD, some with blankets wrapped round them, on board HMS JERVIS in the eastern Mediterranean. The cruiser was torpedoed and sunk by U-565.
© IWM 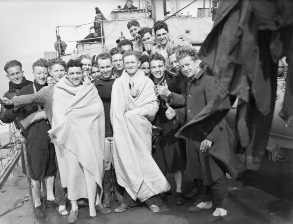 * The number of casualties (killed, died or missing) when a ship is lost or damaged often vary from source to source. There are a number of reasons for this, which are sometimes a matter of definition, and are difficult to verify exactly. The HMS Naiad website does not claim to display the exact number of casualties as it’s difficult to reconcile the many different figures available on the Internet from different sources.  Our aim is to honour the memory of those who served aboard.  If any errors or omissions are identified please contact the association and we will be happy to make corrections or amendments within reason.