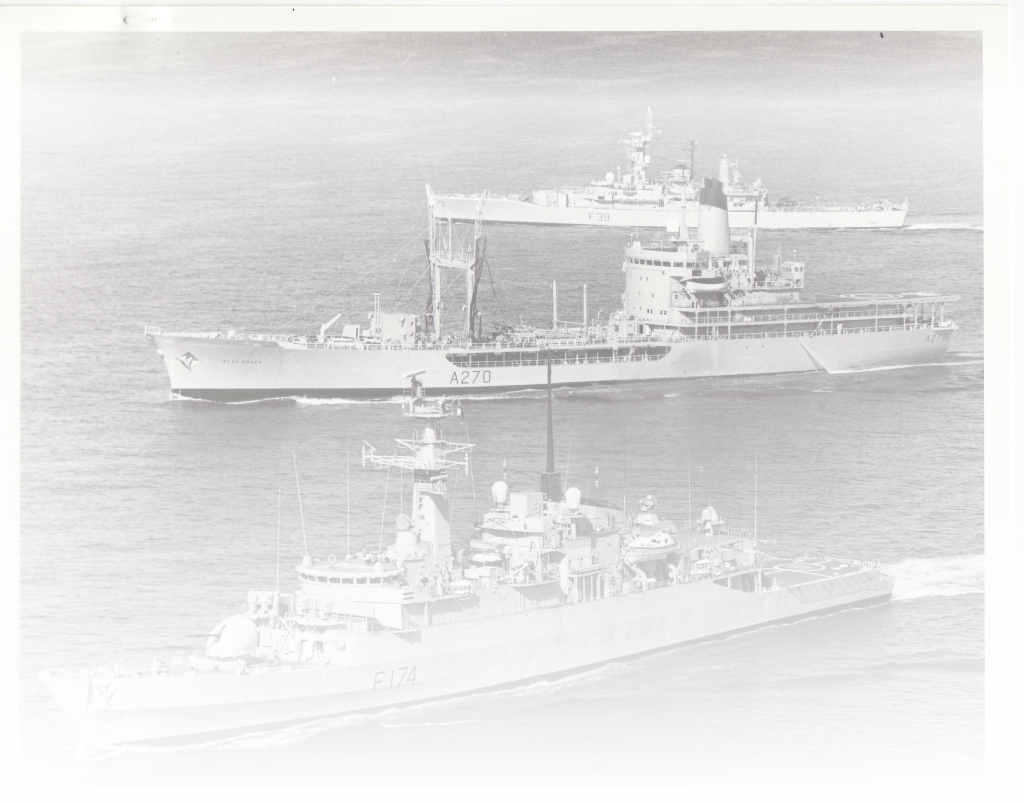 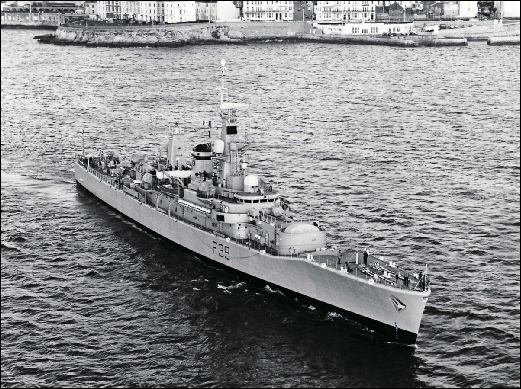 HMS NAIAD was the 200th ship built for the Royal Navy by Yarrow & Co Ltd., shipbuilders of Scotstoun, nr. Glasgow for an estimated cost of £4,750,000.  The steam turbines that powered her were also built by Yarrow and the gearing by Parsons Marine Turbines of Wallsend-on-Tyne. Like the rest of the class, Naiad was named after a figure from Greek mythology; Naiads were a type of water nymph who presided as gods over fountains, wells, springs, streams and brooks.

HMS Naiad was the first Leander-class frigate to be fitted with quadruple Seacat launchers instead of 40-mm guns. She was launched on the 4th November 1963 and commissioned on the 15th March 1965. In 1966, Naiad became the leader of the Northern Ireland Squadron, relieving HMS Penelope, and subsequently deployed to the Far East and South America. In 1970 she began her first deployment to the Far East and whilst there participated in the Beira Patrol, designed to prevent oil reaching the landlocked Rhodesia (now Zimbabwe) via the former-Portuguese colony of Mocambique. She performed her second patrol the following year. The Beira Patrol would be a regular deployment for the Royal Navy until 1975.

In January 1973, Naiad began her 1B major modernisation at Devonport, which included her twin 4.5-in gun being replaced by the Australian designed IKARA anti-submarine warfare (ASW) missile system, this refit was completed in July 1975 at an estimated cost of £10,410,000. The following year, Naiad undertook a Fishery Protection Patrol during the Third Icelandic Cod War, and while there, was rammed by the Icelandic gunboat V/s Týr causing hull damage which required repair at Devonport. In 1977, Naiad, like many other Leander-class frigates took part in the Fleet Review of the Royal Navy, which took place at Spithead in celebration of HM the Queen's Silver Jubilee. Naiad was positioned between HMS Brighton and her sister-ship Andromeda. In 1980, Naiad was again deployed to the Far East and during her return voyage to the UK she was diverted to lead Armilla Patrol in the Persian Gulf in order to enforce security for British shipping in the area, after war broke out between Iraq and Iran.

It was planned that HMS Naiad would enter the Standby-Squadron in preparation for disposal in the early 1980's, but due to the increased workload in the aftermath of the Falklands conflict, she remained in service. In 1981, she deployed to the Mediterranean and in the autumn of 1983, Naiad became the first Leander-class to began her final refit at Devonport dockyard which was completed in 1984 at a cost of £10,400,00.  In 1985, Naiad returned to the Mediterranean, as part of the NATO multi-national squadron Naval On-call Force of the Mediterranean (NAVOCFORMED), the predecessor of the Standing Naval Force Mediterranean (STANAVFORMED). The following year she joined the Standing Naval Force Atlantic (STANAVFORLANT), another NATO multi-national squadron. Paid off on the 1st May 1987, HMS Naiad's hulk was renamed HUL-VUL and used as a static trials ship for weapons effect testing. Between 1988 and 1990 she underwent shock, fire and blast trials and was used to analyse developments in weapons and ship technology learnt from the Falklands Conflict. HMS Naiad was finally sunk on the 28th September 1990 as a weapons target.