The association has been contacted by the son of Ron Pay. Ron was a Royal Marine drafted aboard the third Naiad, the Dido class cruiser, during WWII and was rescued after the ship was sunk by U-Boat 565 in the Mediterranean.  He was put ashore in Alexandria, travelled by train to Mombasa and went on to serve his full term in the Royal Marines becoming Corporal of Horse at Deal barracks.

He has raised four sons, two of which attended school in Malta after the war. The services connection continued with two of his sons serving in the Royal Air Force and one in the Royal Marines.  His best friend during his time in the Royal Marines, Bert, remained close to Ron throughout his life and became like an uncle to his sons. 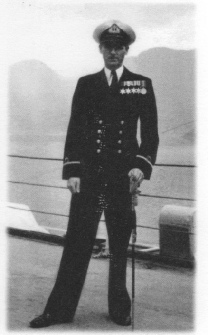 During the 2014 Reunion in London the association had the good fortune to meet Mark Brian.

Mark has subsequently written to us and provided a recollection of his late step-father, Horace, who served about HMS Naiad during WWII. He has also kindly attached a schedule of his 50-year Royal Navy career, the Gazette of his citation for bravery and his mother's favourite picture taken aboard HMS Triumph in Norway.

Horace Walter Polhill, his middle name given to him in memory of his father who was also an engineer, was universally known by his naval nickname of “Polly”. He joined the initial 1937 class of engine room artificer apprentices at HMS Caledonia as a 15-year-old. In 2007, Polly and Anne boarded a train from Peterborough to Inverkeithing for a special reunion. On the platform before departure Polly mentioned quietly and with a smile that it was exactly 70 years since he had set off to commence his articifer training on the same train service.

Polly maintained his naval connections assiduously and proudly, attending many reunions associated with different aspects of his long career; Mark has no doubt that Polly would have joined the HMS Naiad events that the association have established in recent years had he lived to do so, and contributed both through his ever detailed recall of events, and sense of humour.

A personal feature of Polly’s survival of the sinking of HMS Naiad on March 11th 1942 was that he had recently sat promotional examinations on board. His exam papers were sealed and locked away by the captain, but of course went down with the ship. Subsequently the captain vouched for his results, otherwise he might have had to sit one of the most unfair 're-sits' in naval history! He also spoke with amusement of his rejection of allegedly the most beautiful girl in the room while at a dance in Alexandria after their rescue; he loathed garlic and its fumes were breathed all over him when she began to speak!

Although Anne and Polly knew each other and were close in wartime, they did not marry until 2000, after they were both widowed, having kept in distant contact over years. The nearly ten years they were married were the happiest of Anne’s life.

Polly is survived by his only daughter Ghyslaine (Gish) Hobbs who is married to Peter, and his two grandchildren Elizabeth and David, who all live in the Bristol area. Mark’s mother is also still alive, approaching her 92nd birthday living independently in good health, mind and spirits, after recently following Mark’s move from Leicestershire to the beauty of the Brecon Beacons. Polly was regarded with great affection by his four children as 'the only grandfather they ever really knew.'

He is remembered as a most generous spirited and honourable man.

Bob Taylor served aboard Naiad in the late 60's  and is now active in ship model building - recently completing the build of scale models of RMS Titanic, HMS Hood and the Naiad.

You can find out more and view a gallery of his work by visiting his shipbuilding.. Page.