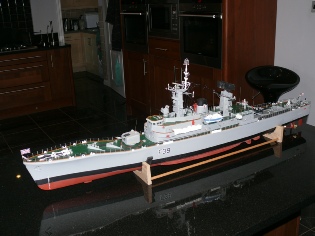 Bob Taylor| Shipbuilder
Bob Taylor served aboard Naiad in the late 60's  and is now active in ship model building - currently building scale models of RMS Titanic, HMS Hood and has just completed his second build of HMS Naiad after more than a two-years of painstaking work.

To date he has built HMS Kelly a second World War destroyer that his father served upon under Lord Mountbatten, this was in a scale of 1:96 this took him about 18-months to complete.  He has also built the German battleship Bismarck which took about 2.5 years to complete on a scale of 1:200 and the RMS Titanic which took nearly 7 months from start to finish in a scale of 1:250. He worked on the Titanic in isolation and worked between 5 and 8 hours per day on her. The Kelly and the Bismarck were worked on simultaneously.

For all of the ships he carries out research from a number of sources including books,libraries and photographs principally on the web. For HMS naiad he used the aforementioned but more importantly his memories and recollections of her, as his home for nearly 4 years.

He uses Jecobin plans to get the hull dimensions and fittings correct. Jecobin supply plans for a number of warships as well as civilian craft. They also have plans for all types of fittings from Ikara to 4.5 inch guns to Exocet, plans are also available for the VDS winch, the davits, the capstan, the Wasp helicopter, Corvus chaffe launcher as well as many other fittings. He consults many books on the subject matter. For example, for the Leander he has three different books "Leander Class Frigates" by R. Osborne and D. Soden, "Leander Class" by Cdr C. J. Meyer OBE and "Leander Class Frigates" by J. Allaway. There are also many photographs available on the web.

Shown here are images of Treasurer, Bob Taylor’s, completed second model of HMS Naiad as she was post-Ikara refit. At a scale of 1:72 this model is significantly larger than the original model, which was built at a scale of 1:96; an overall difference in length of 12-inches.

Bob built this Naiad scale model as she was when he served onboard her from September 1966 to  April 1970, with 4.5 inch guns, the 965 single bedstead radar, the variable depth sonar but without the twin Oerlikons just abaft the bridge as on other batch one Leanders but not fitted to Naiad.