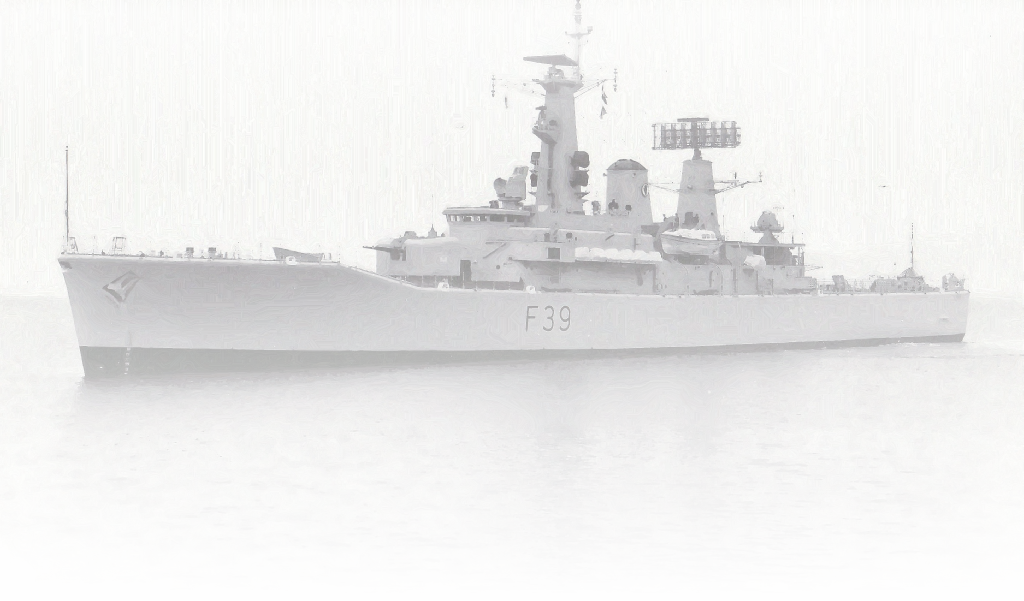 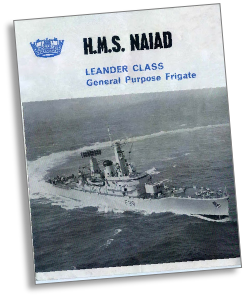 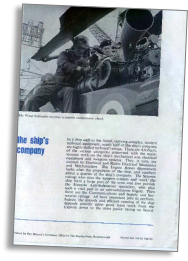 The original “Welcome” brochure produced for the Leander Frigates

As discussed in “Leander Class Frigates, A History of their Design and Development 1958-90, by Osborne & Snowdon” HMS Leander, which entered service in 1963, was the first of twenty-six completed for the Royal navy during the subsequent 10-years.  These particularly graceful frigates, which proved to be excellent sea boats that were reliable and popular in service, formed the backbone of the Royal Navy’s escort force in the 1970’s. Since first entering service, most of the class were given major reconstructions which restored their fighting capabilities and even today the Leander’s legacy is an important component of the British surface fleet.

Indeed, the design was adopted partically or wholly by the the Australian, Chilean, Dutch, Indian and New Zealand navies, and a total of eighteen ships were built for, or by these nations.  The last Indian Leander, INS Vindhyagiri, was completed in 1981 and served India for 31-years before being decommissioned in 2012 after being irreperably damaged during a collision entering Mumbai harbour in 2011, thus bringing a close the service of the original Leander class design, a design that achieved a service life of over fifty years.

The Leanders represent one of the outstanding frigate designs of the post war period, and they were built in greater numbers than any other class of major Royal Navy surface ships since 1945.

The Leander-class frigate design can be considered justifiably a success.  The ships proved to be capable of fulfilling their intended tasks with economy as well having sufficient margin to permit useful modernisation and it is significant that their successors, the Type-22 Broadsword class, had to be approximately 1,600 tons heavier, 60-feet longer and at least 5.5-ft greater in the beam in order to accommodate all the weapons and sensors necessary in the 1980s for a seaworthy, first class ASW firgate.  Leander, Naiad and all their other sister ships can therefore be regarded as representing the maximum that could be hoped for in a relatively small but ocean-going hull and consequently their high reputation would seem to be well deserved. 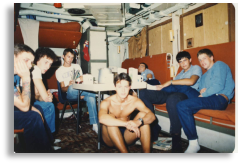 In the Leander class frigates, extensive alterations were made to the operation of the ship's life support to enable the ship to have a chance of surviving less conventional warfare. The port holes in the hull were removed, and most of the ship formed a Citadel which could be pressurised above air pressure, any leaks and even minor damage would not allow in contamination as the inside pressure would blow out through gaps. Severely damaged areas could be sealed off, access into and out of the citadel was via airlocks where decontamination teams would be waiting.

Shelter stations were provided below the waterline to shelter from high radiation levels and the ship was equipped with monitors and a water jet system called "Pre-Wetting" which formed an umberella above the ship, reducing the risk of chemicals, radioactive particles or nerve agents from settling onto the ship. Air into the ship was scrubbed and monitored, allowing the ship to recycle it's own air.

The main machinery spaces were not included in the citadel due to problems with the quantity of water and air required for the engines, but the batch-3 ships overcame this with remote control systems; the previous ship’s stokers had to wear protective gear in the machinery spaces.

Living conditions were good for the period.  Though cramped, the mess decks had enough bunks for all. Hot water was in plentiful supply for the bathrooms and there was a recreational broadcast system for radio when there was adequate reception, home grown music and quizes when not. In later years, close circuit TV was added in addition to the showing of reel-to-reel films in the dining room.

The main negative was lack of space. The bunks were arranged in three layers, the bottom two of which folded away to form a seat bottom and back. The top bunk could remain as a bunk and was greatly sought after by those whose duties kept them up at odd hours. There was no privacy, though some modicum could be simulated by rigging a curtain around a bunk, but there was often conflict on an evening between people wanting to socialise on the seats and the bunk occupants wanting the bunks made up. For this reason the top bunks and the alcove spaces were greatly desired luxury as they did not form the main seating area.

The mess decks tended to be noisy, the aft compartments were over the ship's propeller screws and close to fuel pumps and the forward areas filled with sea noise, and always there was the roar of the fans. In warm waters the mess decks became unbearably hot and stuffy.

Lockers for junior rates were tiny affairs and all possible nooks were utilised to augment them.  A valuable asset was the "beddy bag"; a zip-up mattress cover intended to secure the bunk mattress, pillows, sheets etc into a single pad that was kept strapped securely down in action so as not to clog pumps. Carefully arranged clothing and personal posessions could also be stored within them.

Another great improvement was meals were no longer eaten in the living area but in a dedicated dining room adjacent to the galley where food was served through a elongated hatch.

By the late 70's the Type-21 were starting to make their presence felt and many sailors were confident the Type-12's would be phased out in favour of these wonderful new ships. Everything impressed, from the well thought out control systems, the clean engine rooms, the superb accomodation. Many naval staff who were drafted to Type-12s such as the Leanders felt slighted and passed by, doomed in the promotion stakes as they were missing out on the new technology.

But that just did not happen. If anything the Type-21 seemed to be side-lined, one rumour was the Olympus engines consumed so much fuel that given the sudden huge jump in oil prices the Royal Navy simply could not afford to run them.

When the first of the new "Super Frigates", the Type-22 put in an appearance many realised that the Leander was going to be around for a long time yet. Most insisted on a Leander berth when stating draft preferences, typicaly a form of the time would ask for three preferences in order of prioirty and it was not uncommon to see them completed and submitted as  "1. Leander;  2. Leander; 3. Leander"

The phrase "Leander-Man" entered the language. "You Frigates mate?" "You bet, Leander-Man to the core!" What it was about these ships that inspired loyalty and affection in the crews is hard to explain. Although described as good sea keepers that is not an answer you would get off a crewman after three days and nights out in the Bay of Biscay, covered in bruises, bleary-eyed from lack of sleep, hanging on for dear life as the ship smashed through waves and the crashing sounds from the galley announcing that dinner was going to be cold sandwhiches again.

Men did not sleep on a Leander in bad weather, they strapped themselves into their bunks, wedged themselves as best they could and dozed in-between the more violent manouvres. When they got up they felt like they had run a marathon while being beaten with clubs. It was crowded like an underground train, wreaked of fuel and sour grease, noisy and either red hot or freezing cold. Then when the ship cleared the bay and the sun came out the skipper would order the hatches sealed shut, put the crew on six-on, six-off defence watches until the ship found the Arctic storms up by Nova Scotia.

It was like having a bad tempered mistress, you worked your heart out to please her and she still slapped you around, but you just could not bear life without her! 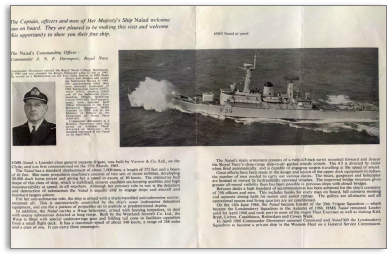